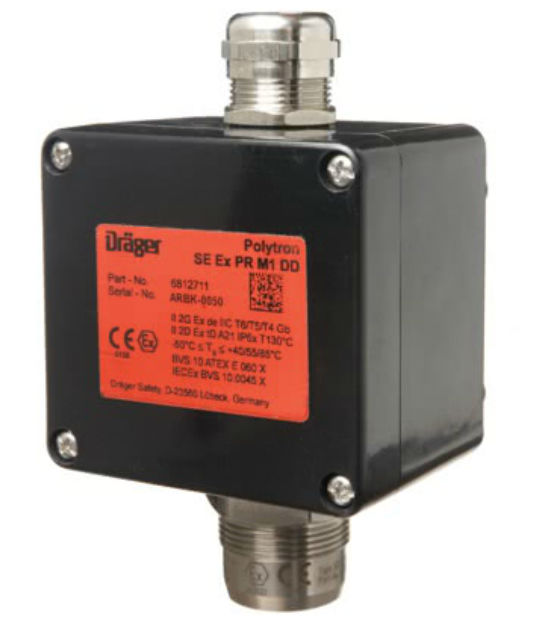 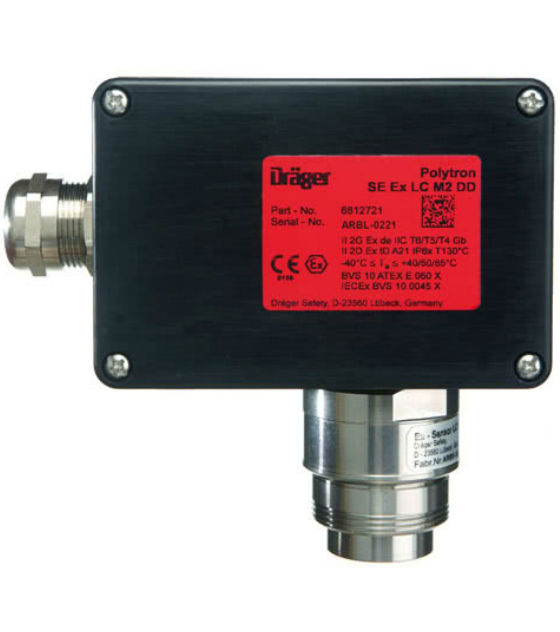 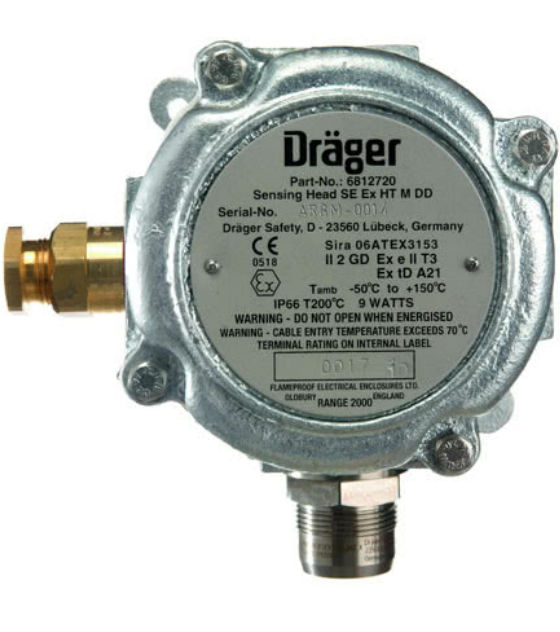 The Drager Polytron® SE Ex ... DD sensing heads are gas detectors for the continuous monitoring of flammable gases and vapors in the ambient air. The measurement is based on the heat of reaction principle, where a chemical reaction takes place in a catalytic bead (so-called pellistor) inside the sensor.

Please note - Product designs and specifications are subject to change without notice. The user is responsible for determining the suitability of this product.

By this, concentrations of flammable gases can be detected long before they tend to be ignitable, in other words: before they reach the lower explosive limit (LEL). The sensing heads are intended to be used in the harsh industrial environment and connected to a suitable central controller by means of a 3-core cable. Based on different sensor types Drager offers three versions for different applications: On the one hand for the detection of up to 100 %LEL (where a special HT-version can be used at ambient temperatures up to 150 °C), on the other hand for the detection of very low concentrations in the range 0 ... 10 %LEL (leak detection).

The sensing heads Drager Polytron SE Ex PR ... DD and SE Ex LC ... DD are available as four variants each, which differ by their junction boxes, specified by the following code:

Besides these junction boxes made of glass fiber reinforced Polyester (GRP) with type of protection "e" (increased safety) housing a sensor with metric ("M") thread, a further variant with type of protection "d" (flameproof enclosure) is available, coded as: NPT1 - flame-proof metal housing This variant houses a sensor with NPT-thread and is intended to be used in conduit installations. The variant M2 should preferably be used in outdoor applications since the lateral cable gland may be exchanged by the stopping plug so that the cable can be inserted from the bottom.

The sensing heads Polytron SE Ex ... DD are labeled acc. to the Directive 94/9/EC (Atex 95) as II 2G/ II 2D and thus are suitable for operation in areas with potentially explosive atmospheres of zone 1 and 2 as well as zone 21 and 22. In the same way, for world-wide applications, an IECEx-approval allows to operate these sensing heads in hazardous areas.

The flame-proof encapsulated gas sensor produces a mV-signal which is proportional to the gas concentration and can be evaluated by a suitable central controller (e.g. Drager REGARD or Polytron SE Ex). Connected to the sensing head via a shielded 3-core cable of several hundreds of meters length, the central controller is intended to activate alarms if dangerous gas concentrations occur.

Since they are operated as precisely measuring temperature dependent resistors, the measuring beads housed in the sensor are called pellistors (from engl. pellet and resistor). A pellistor is a small bead made of very porous ceramic material which is impregnated by a special catalyst and embedding a small platinum filament. By means of an electrical current of approx. 255 mA on the one hand the platinum filament heatsup the ceramic bead to roughly 450 °C,on the other hand this platinum wire actsas a measuring resistor dependent on thebead's temperature.

When molecules of a flammable gaspenetrate into the catalytic bead they reactwith the activated airborne oxygen which is adsorbed in the porous ceramic and release heat of reaction causing the pellistor's temperature rising. The resulting resistance increase of some milli-Ohms is proportional to the gas concentration.

By means of a second, entirely uniform pellistor, which is especially encapsulated, any parameter affecting precise measurement is optimal compensated. This is particularly true in respect to humidity and ambient temperature.

During manufacturing these pellistors are matched in respect to optimum compensation characteristics. Since both these pellistors are catalytic the sensor is called type DD, standing for double detector with a resulting long-term stable sensor signal being nearly unaffected by ambient temperature changes.

The pellistors which are manufactured since decades are of type PR, which means poison resistant. Based on their special construction these sensors have a longer lifetime compared to conventional sensors when being exposed to industrial atmospheres containing catalyst poisons such as sulfur-, phosphor-, lead- or siliconcompounds.

To achieve short response times the gas entrance of the DD-sensor is not a conventional sinter disc but a thin wire mesh disc so that the gas to be detected can very quickly enter the pellistors by way of diffusion.

In conjunction with some Drager central controller units the Drager sensing heads Polytron SE Ex PR ... DD and HT M DD are type-approved to be used in pre ventive explosion protection applications acc. to EN 1127-1. This is a customer's benefit since in case of a dangerous gas concentration a performance approved gas detection system will auto matically activate countermeasures so that explosive concentrations cannot form and the extension of hazardous areas thus decrease. By this, electrical installations can be designed more simply and in some cases even no further explosion protection measures are necessary.

This is because potentially explosive atmospheres occur seldom or even not at all when having a gas detection system like this.